When Cities Get Married: Gendered Language in the Merger of Jersey City and Harsimus, 1851

When Richardson Dilworth was doing his doctoral research on municipal consolidations of the 19th century, he noticed that a marriage metaphor was often used in newspaper content of the issue as it came to voters. This was particularly the case in coverage of Van Vorst Township’s proposed merger with Jersey City in 1851, which would enlarge Jersey City’s boundaries to encompass all of today’s Downtown.

Professor Dilworth joins us to discuss his research process, the history of shifting municipal boundaries, and Jersey City’s union with “Miss Harsimus.” 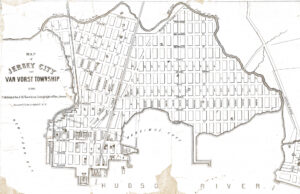